by Nancy E. Hassel, American Pet Professionals Many people take to social media to air their differences, voice their opinions, start 'keyboard wars,' complain, and bash companies or people they have never met.  It is human nature where we can have knee jerk reactions in our fingers and sometimes post something we would later regret or wish we could take back.  But sometimes I am just in shock over what people say on social - especially business owners.  This is not the first time I have written about this topic, and I believe your reputation is everything when it comes to you and your business.  And what and how you say/do things on social media can reflect that.  You can easily ruin a relationship, your business or friendship with the tap of the return button.  Things can be taken out of context online and quickly escalate - when maybe it's not what you meant at all.  When it comes to your business, I have always said, think before you hit return - or walk away from that email, and reply the next day it if you are heated about it.  You may realize, it's not worth the fight or loss of your good reputation.  Recently I took to social media about a pet product I bought for my dog Cody - that he destroyed in under two minutes.  Instead of being mad or angry the toy didn't hold up to what the manufacturer's label said, that it was tough and showed a picture of a Pit Bull on the label. 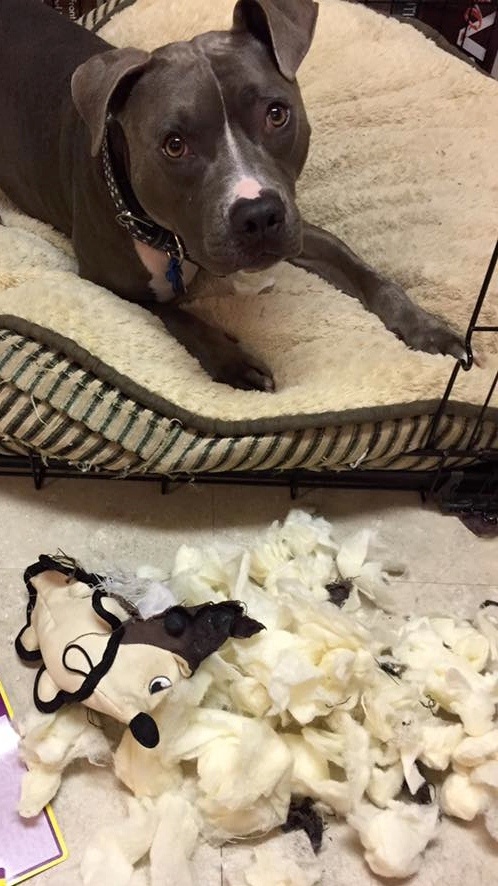 I decided to use Cody's voice to let the manufacturer know how quickly it was destroyed for a few reasons: 1.) Parts of the toy came off so easily and if swallowed could cause a problem for the dog. (I  was watching Cody like a hawk as he was tearing up the toy so he didn't ingest anything).   2.) For the mere fact that he destroyed the entire toy in less than 2 minutes.  I actually bought it because it was very cute, seemed really strong and had NO squeakers inside of it.   I also thought he might destroy it, but just didn't think it would be less than two minutes. 3.) That the toy did not hold up to the tough status and the company should know about it. I always tell people to monitor their dog with any toy. Dogs eat odd things all the time, and eating a part of a toy can cause a blockage - which could be very harmful, even deadly if not diagnosed properly or caught in time.   So withOUT bashing the company or being RUDE on social, I tagged the photo of the toy manufacturer (but not on the main post, tagged on the picture separately), and in Cody's voice on his page said, "Maybe's mommys coulds get hers moola back?"  The company responded within less than 12 hours and they said, please send the picture to Info@   address.  So I did. I wrote a polite and professional email telling them I really like a lot of their toys but can't usually buy them because my dog would rip them up and that really only Kongs, rope toys and regular tennis balls hold up to Cody's chewing.   I voiced my concerns of the toy and likes (no squeakers).  With in less than 24 hours the Vice President of the Company (and large company at that) called me directly. After a very nice conversation with her, (I mean extremely professional and courteous), she was very concerned about how quickly the toy was destroyed, was very happy for feedback (good and bad) - that they take feedback and suggestions very seriously at their company. The end result of our conversation is that she shipped me a box of toys for Cody to try out, we are scheduled to have a meeting at Global Pet Expo in March 2017, and we will touch base in the new year on how we can potentially work together.   And the best part?  They want to find out how they can help out our rescue members of APP.  How amazing is that?   I liked this company before, and now am more impressed with how they handled this situation.  My intent was not to get money back for the toy - but really to alert them of how quickly it was destroyed. But I did not want to do it in a mean spirited or unprofessional way, what good would that do anyone anyway?  Now because Cody destroyed a toy I bought and I posted in a way that was not mean or ripping apart another business, I have a great new connection in our incredible pet industry.   I love this industry and the people in it.  We can get heated over many things online, but in the end I think choosing kindness and professionalism is the best route. Happy New Year pet pros - wishing you all nothing but the best!  ]]>